PAST EVENTS - AN ARCHIVE 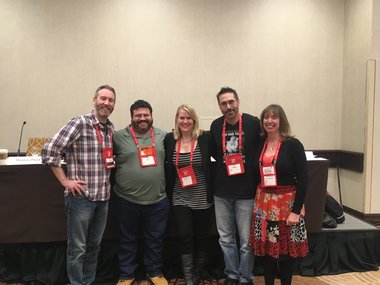 I was excited to go to my first Bouchercon, in a city I have reason to visit regularly, since I have quite a few friends there. I was also pleased to be on a panel, entitled 'Beautiful Brutality: Violence in Mysteries'. The panel was on Friday morning at 8:30am, so I thought we wouldn't have much of an audience. Unlike SF & horror conventions, though, where at that hour in the morning most of the delegates have only been in bed a couple of hours, it seems that crime fans like to start early and we had a good turnout. 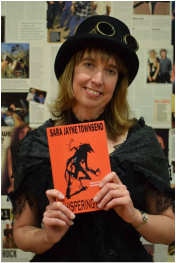 ﻿My horror novel 'The Whispering Death' launched at The Brook bar and independent arts venue in Wallington, Surrey on 14 October 2015. Although I was worried nobody would turn up, I had a reasonable turnout that even included a couple of genuine punters - ie, people who had seen the poster and decided to come along to see what it was all about, without having met me before.

I donned the steampunk gear just because, well, why not?

Picture courtesy of The Brook. 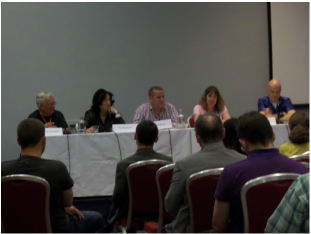 I've been attending FantasyCon for years, but my first opportunity to be on a panel came at the 2014 Con in York. The panel was exploring the concept of whether there can be hope in horror, or whether unrelenting gore and despair are part of the genre? I am not sure we came up with an answer. Personally I think there can be hope in horror, but unrelenting gore and despair is perfectly acceptable. However, it seems a lot of readers don't agree, and don't like horror novels where everyone dies at the end. 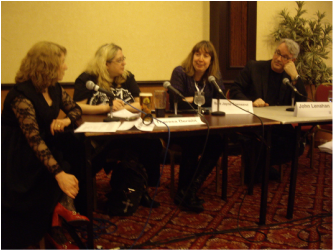 At the EightSquared Eastercon in Bradford, I was on my first panel - a Head to Head looking at Bram Stoker and Mary Shelly, two classic gothic horror writers. Here is the panel in action.  Here I am with my fellow panellists.  From left to right:  Kate Solomon, Theresa Derwin, me, and John Lenahan. 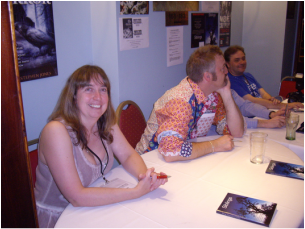 The SIBLINGS anthology, published by Hersham horror press and featuring short stories by five authors on the subject of siblings with a dark secret, launched at FantasyCon 2012 in Brighton.  Alongside me at the signing table and visible in the picture are Simon Kurt Unsworth and Stuart Hughes.

We had a prime position by the dealer room, which meant we could heckle everyone who passed by on their way to buy stuff. 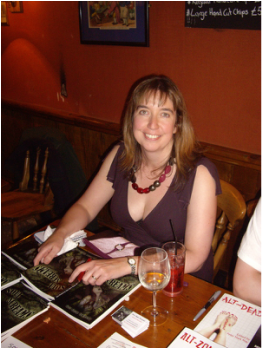 My short story collection, SOUL SCREAMS, officially launched at the British Fantasy Society's social night at the Mug House, Tooley Street, London on 16 June 2012.  I was very privileged to launch my book alongside publisher Peter Mark May of Hersham Horror Press, launching his new anthology ALT-DEAD, and Jo Fletcher, who was launching a new and very lovely collection of MR James ghost stories, edited by Steve Jones.

With such well-established publishing legends present, I was a little afraid no one would want to buy my book, but the BFS have always been incredibly supportive of new writers and small press publishers, and by the end of the day I had sold all the copies I had brought with me. 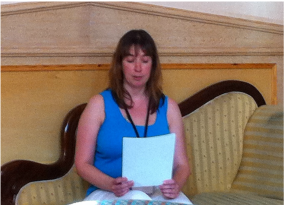 Attendees at FantasyCon 2011 in Brighton got a sneak preview of SOUL SCREAMS, as I read out two stories from the collection at my reading on the first day of the conference.  It was a very hot weekend, and the hotel had no air conditioning.  No one fell asleep, however, which I took as a good sign. 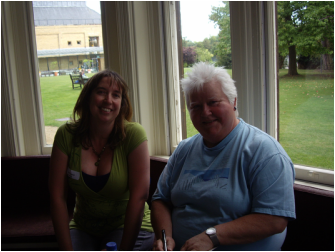 One of the things I love about the St Hilda's crime conference is that because it is such a small conference it gives one the opportunity to meet personally the fabulous crime writers who attend.

Val McDermid is a St Hilda's alumna and a regular attendee at the conference.  I have had the opportunity to speak to her at St Hilda's on several occasions, and as well as being one of Britain's best-selling crime writers and a lady with a towering intellect, she is also a lovely person. 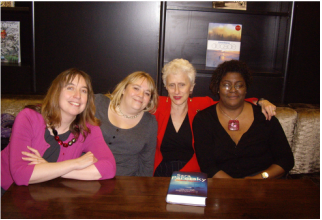 I was very excited to get the opportunity to meet Sara Paretsky, an author who has greatly inspired me for the last 20 years, when she came to London to launch BODY WORK, the fourteenth novel in the V I Warshawski series.

I feel honoured to have met this legendary lady in person.  And either she did not notice the embarrassing fan-girl wibbling on my part, or she was too polite to mention.  Here I am with Ms Paretsky, along with friends and fellow crime fans Kirstie Long and Ayo Onatade. 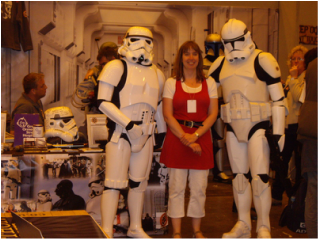 I joined the Mystery Women at the London Film and Comic Con in the summer of 2010, to sell and sign books and generally marvel at all the wonderful costumes that were present.  As a hard-core Star Wars geek, I was very pleased to get the chance to meet so many characters from the Star Wars universe, including these Storm Troopers. 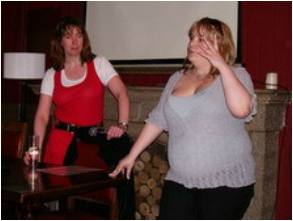 The 'real space' launch for SUFFER THE CHILDREN was held in the function room of The George tavern, The Strand, London on 28 April 2010.

Here I am being formally introduced by Kirstie before I give my reading.  We held a raffle, featuring limited-edition STC merchandise as prizes, and I offered copies of the e-book on CD for sale.
Powered by